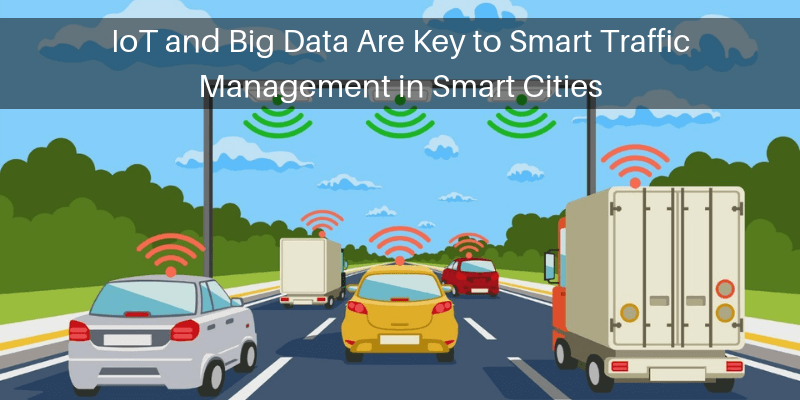 After mobility transformed our lives in the last two decades, it’s time for ubiquity to take over and IoT seems to be doing a pretty good job at it. You may have heard of these devices deployed in homes, warehouses, and vehicles for security, convenience, and tracking purposes but there is also one sphere our life that is quietly being shaped by this new technology- our daily commute in the city. While public transport has had such devices for quite a while, it is only recently that they have started appearing in all over the city.

But before we get into specific measures, let’s first see how these two technologies- IoT and Big Data are connected. IoTs on their own are nothing more than an input device that continuously records streams of data. This data can be in a variety forms including audio, video, temperature, and more. But once there is ample data collected, Big Data analytics is applied to identify patterns. These patterns are then used to take certain actions every time observed.  Let’s take a look at how this mechanism is used to alleviate the problem of traffic:

Nobody really likes stopping at traffic lights but it gets even worse when you have to wait at a red light while there is nobody in the lane with the green signal! This is a common irritant because traffic lights generally use a fixed timer to manage traffic at junctions while the traffic flow remains highly irregular.

When all the traffic lights in a city are connected, systems get a clear understating of where the traffic is, where it’s moving and subsequently, can take preemptive measures for traffic clogging. There are already some cities that have deployed IoTs across the city infrastructure to monitor the number of vehicles moving in any particular direction. If at any time, the pattern of vehicle movement resembles any earlier pattern where a traffic jam was observed, the signals automatically start diverting the traffic to bring overall equilibrium.

Taking manual interventions off road not only helps improve the traffic flow but is also instrumental in enforcing traffic rules. As IoT devices keep an eye on every corner and nook, they can be fed with requisite data to detect traffic violations like over speeding, rash driving, jumping traffic lights, among others and automatically generate the corresponding tickets-which are then set to the address of the registrations plate of the vehicle. Most of the metropolitans already have some kind of similar system deployed that isn’t just convenient but has also proved to significantly bring down such violations.

Transportation is one of those areas where IoT app development probably has had the most impact. But their inclusion in city infrastructure takes the possible use-cases to an entirely new level, one of the most prominent of which is related to safety. Like detecting traffic violations, IoT devices can also be trained to detect road accidents and automatically call emergency services to the location. This kind of automatic response saves crucial time immediately after an accident- the time that can potentially save a lot of lives.

Along with these key measures, there are many smart cities experimenting with a host of other IoT based solutions to improve the overall traffic conditions. Some of them build an IoT app for solving parking issues while others have similar systems for detecting theft. Now because deploying such infrastructure requires a lot of planning and resources along with fresh insight, most of such cities prefer to hire offshore developers who bring with them new ideas that local firms may not have.