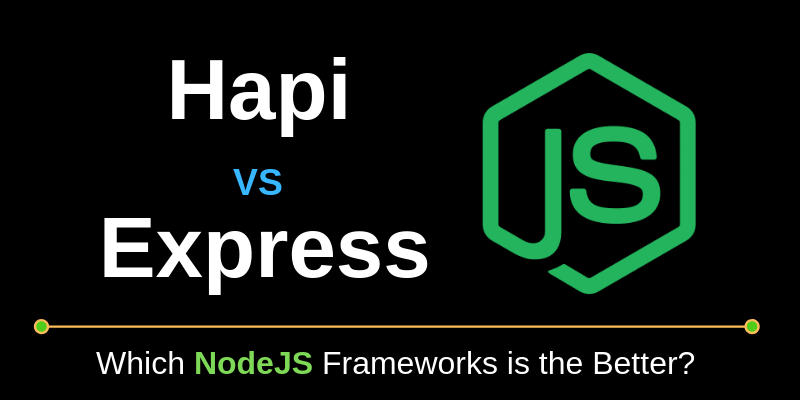 NodeJS is now at the forefronts of web development particularly owing to its lightning speed and versatile JavaScript. If you don’t already know, it is the Node that brought JavaScript to the backend development and perhaps for the first time made it possible to build an entire web application using a single language- JavaScript. But like core PHP, the capabilities of core NodeJS is severely limited and thus evokes the need for a framework. They essential for handling numerous housekeeping tasks and thus significantly boost the productivity and overall quality of applications.

Hapi is much more abstracted to Node than Express and for that reason, the code in Express feels much more like native Node. Though both of the NodeJS frameworks are equally adaptable and extensible, seasoned developers often lean towards to Express for its familiarity

Since Hapi is a newer framework, it comes equipped with a whole set of functionalities that otherwise have to be delivered through third-party components. take form processing for example- while Hapi parses form data on its own, Express needs an additional layer of middleware to perform the task.

Express relies on middleware for a whole range of tasks. Hapi, on the other hand, uses Plugins. While both the approaches have their own set of positives and negatives, their key difference doesn’t lie in their capabilities but the approach. Some developers might prefer the high abstraction and plugin-reliance of Hapi while others might be more content with the native feel of Express. Nonetheless, in the comparison of Express vs. Hapi, the winner doesn’t necessarily have better performance or capabilities but a more confirming approach to the existing preferences of developers.

Native Node far outperforms both Express and Hapi but if you are strictly looking for performance comparison of Hapi vs. Express, there isn’t much significant difference. Yes, Express does outperform Hapi in controlled test cases, but that is a result that’s tough to replicate in a real-world environment. The performance lags of Hapi are mostly to plugins that are configured at runtime and thus brings down the overall performance.

JavaScript, to this date the only language that can be used meaningfully to build a web application in its entirety. And while NodeJS does offer significant performance boost, it alone isn’t enough to build full-scale feature-rich applications. For that, you would need NodeJS frameworks of which Hapi and Express are among the best. While both of these frameworks stand almost toe-to-toe when it comes to their capability and performance you might face one major problem- expertise. Since they are arguably pretty new technologies, it’s tough to find expert developers. If you happen to face such problems, you can always resort to hiring offshore developers from India, known for their excellent value proposition.