Software development is not simple as it seems. Unlike other industries, there are no supply chains or raw materials to manage, but only the workforce is the nucleus around which all business prospects revolve. And since software developers are valuable assets, the dilemma that companies often face is whether to hire in-house developers or just contract them whenever a need arises.

The knee-jerk response that companies often adopt is that they hire developers in-house because it not only brings stability to their business, but also contributes to the overall quality. But if you look at the counter argument- hiring freelancers not only brings flexibility, but also enables businesses to pursue many more projects at the same time. It becomes almost impossible to come up with an optimum strategy.

Now since the problem involves a lot of aspects, and can’t possibly be covered at once, we will focus only on the two largest factors- Cost and efficiency.

Again, the common perception among the organizations and business individuals is that freelancers charge a lot and it is relatively cheaper to hire in-house developers instead. And there is a good reason for that perception, expect its only half the picture.

To project the true scenario, lets dive into various cost estimates that would ultimately help you make an informed decision.

For the sake of simplicity, consider a company X wants to develop a mobile application, for which a developer takes 52 weeks to complete. So, what should be the optimum approach a company adopt to minimize cost?

“Software developers” in itself is a complex term that envelops a broad range of expertise and fields including web development, API, mobile apps, cloud solutions, enterprise-grade solutions, on-demand solutions and much more. Depending upon the field and experience, the hourly rate of freelancers can vary anywhere between $30-$150. Taking a lower than average rate of $60/hour as benchmark and a working of 40 hours/week, each developer will charge around:
60*40= $2,400/week

To remind you again, this is just a crude estimate and depending upon the specifications of your project, can move in both directions.

Now if you head out to the US Department of Labor website, it will tell you that the mean annual wage of a software developer is $100,080. Wow! That’s almost 20% less than the cost of hiring a freelancer. But as mentioned earlier, it is far from the whole picture. So, lets dig a little deeper to get a full sense of commitments and costs that come bundled when you hire dedicated developers. 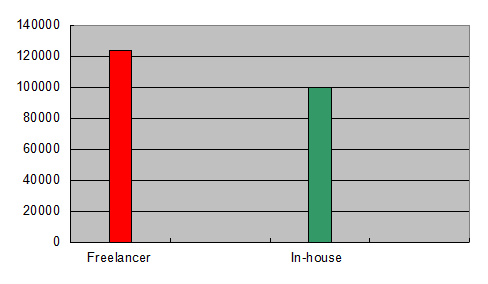 Depending upon where your company is based, the department has issued fixed guidelines regarding benefits and reimbursements that a company must provide to its employees. Take a look at one such table that lists all compensations that you must commit to your employees: 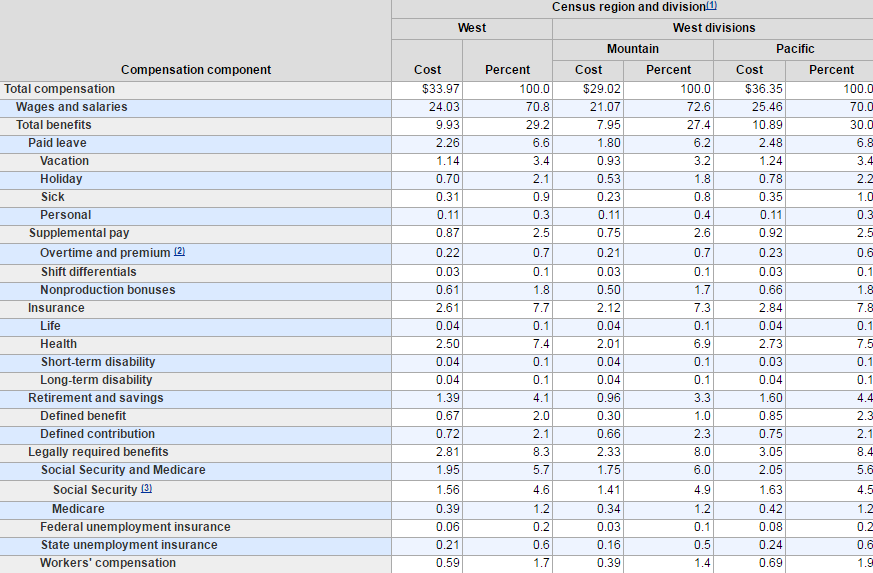 If the table seems cryptic, let us break it down for you. Along with the basic salary of $100,080/year, the government mandates that you also pay your employees:

Compared to the cost of hiring a freelancer, this amounts to a 10% extra expenditure per employee. But the picture still isn’t complete!

The salary mentioned above is what a company directly has to pay to its employees, but it is not same as the benefits that they receive. From a cup of coffee to infrastructure to the cost of keeping the janitor, there is an array of additional costs that a company must pay for its employees.

These costs are generally categorized in two parts- 1. Fringe and overhead and 2. General and administrative. An estimation of these costs accounts for around 25% and 18% of the salary, respectively. If we add it to the cost incurred by the company,

If you now compare this figure to the initial hunch where freelancers were 20% more expensive, you will realize it was a misconception. Practically, you have to shed almost $50,000 extra for each in-house developer you hire. 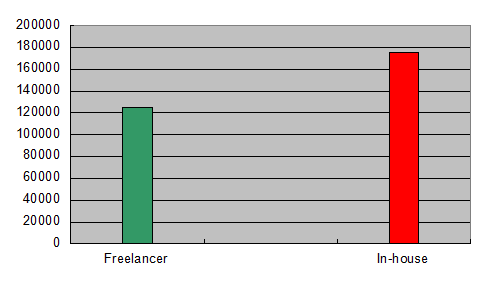 The best of both

Now after this in-depth cost analysis, two things are obvious- 1. Freelancers are less expensive but they are not reliable and tough to manage for large projects; 2. Though in-house developers are reliable and perform well in team, they are much expensive.

Building a team is one of the most crucial aspects of any business and one that must not be taken lightly if they wish to be profitable. And as demonstrated above, hiring one freelancer over in-house developer can save you around $50,000/year, but at the same time, this will be a compromise with quality, even uncertainty. Also, it is common sense that no project is ever completed by a single employee but requires a team scaling up to dozens.

This means the benefit of choosing dedicated developers is two fold- 1. Save you hundreds of dollars on each project; 2. Initiate many simultaneous projects as you wish.

Now that you are aware of all the facts, it is time for you to make a smart business decision that leads to productivity and bring profits to your business.

With his years of experience working across the expanse of offshore web development, Tushar brings along decent knowledge and insights over offshore hiring with his diverse writing pieces – covering different stints, resources and ideas to help you keep close with trends and traits of the offshores.